At Devoxx, I had an interesting chat with the guys from ZeroTurnaround on their LiveRebel product. LiveRebel is a Java EE server management tool, designed for making automated, instant updates to Java applications in production without server downtime. ZeroTurnaround had prepared a nice demo and I was really eager to try it myself .. on a real project.

One of the projects I’m currently working on, uses Jenkins as a CI server. Our applications are built in Maven and use Sonatype Nexus as a central repository. Post-build, we have Sonar integration. As I didn’t want my proof-of-concept to interact with our actual application server, I installed a new GlassFish 3.1.2 server. Just to make sure the application server didn’t interfere with the result, I manually deployed the WAR of the selected application first on the new GlassFish server. That part didn’t pose an issue.

After downloading the stable version of LiveRebel, I started the LiveRebel Command Center:

This results in a web front-end that can be used to easily configure servers and applications:

On that front-end, you need to select “Add Server” and select the platform you want to deploy on (GlassFish in my case). The web front-end will present an easy to follow guide on how to install the LiveRebel Java Agent: (lr-agent-installer.jar) for that specific platform. After restarting the GlassFish domain .. all is ready. It’s also possible to enable/disable the LiveRebel java agent:

After installing LiveRebel, I downloaded the LiveRebel Deploy Plugin for Jenkins. This plugin requires the LiveRebel authentication token. In my Project in Jenkins I added a “Post Step”: Deploy or Update artifact with LiveRebel. After selecting my new server I fired up a Jenkins build … And saw that my application was getting deployed to the new server .. and was working as expected.

I have to say that I was impressed with LiveRebel and how easy it was to get it all up and running with an actual application. Since it’s started from Jenkins, a lot can be configured: deploy time, naming, .. The LiveRebel web front-end makes it possible for Operations to do automated deploys if continuous deployment isn’t “possible/accepted” in a productive environment.

I made a small scheme to illustrate the final set-up of my proof-of-concept: 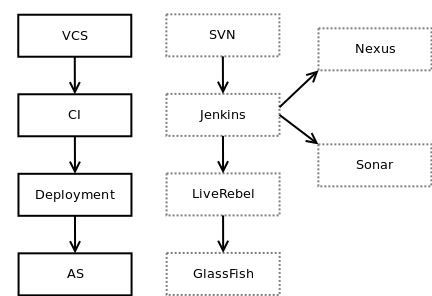 All of the steps now work automatically, without any manual actions. I haven’t looked into more advanced features such as database integration, rolling restarts or the possibility to maintain user sessions over deploys, but I’m intrigued to play with it more.